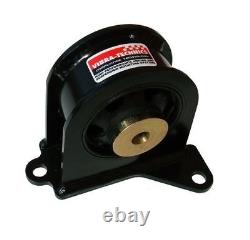 For fast road or track day cars use HON170M. IF YOU REQUIRE AN ADDITIONAL. GET THE CORRECT PART FIRST TIME.

PLEASE MAKE SURE YOU CHECK THE NOTES SECTION TO THE LEFT OF COMPATIBILITY TABLE. What are the benefits if using Vibra-Technics engine mounts? Our products are designed to give uncompromising performance. Lower overall engine movement significantly reduces the stress on engine connections such as inter-cooler pipes, fuel lines, exhaust systems etc. Clearance between the engine and other critical parts such as a strut brace and other under bonnet hardware is maintained. What's the difference between a "Road" mount and a "Competition" mount? Engine mounting systems are a balance between isolating engine vibration and controlling engine movement.

The engine mounting system is in effect an engine suspension system. Its geometry can be as critical as the main suspension system on your car. The same factors affect its performance, stiffness damping, deflection etc. When we design a system we go back to the first principals of vibration isolation, to ensure that we develop something which has the primary function of isolating vibration from your engine.

The main difference between a "Road" system and a "Competition" system is the point at which they isolate engine vibration. Road systems have to isolate vibration right down to idle speed which is extremely difficult to achieve whilst controlling engine movement and requires careful tuning of the mount stiffness. Be aware that the "Road" mounts are stiffer than the original equipment so may give some perceptible vibration. Competition systems have an isolation threshold above 3000RPM, below which the transmitted vibration can still be quite high. This allows us to make the system much stiffer to control engine movement to a minimum, typically less than 3mm (compared with 25-30mm for an OEM system).

The engine and transmission is typically a 200+kg mass swinging around under the bonnet of your car like a pendulum on its original equipment mounts. 1 Physical movement of the mounts under extreme accelerating, braking and cornering. This actually shifts the centre of gravity of the car in the worst possible direction. This can severely affect the car balance at the most critical time. 2 Secondary ride, sometimes called "engine shake" is the movement of the engine caused by bump inputs from the main suspension system causing the engine to wobble on its mounts. In extreme cases, it can be an unpleasant thumping sensation. The very large engine mass shaking around will cause unwanted dynamic forces on the car. What type of mounts do I need for my Track Day car? This very much depends on what else you use the car for. If it is used as a road car during the week then we suggest you use mounts that are specified as "Road". If you car is only ever used for track days and is not used on the road then try the "Competition" mounts for a real race car feel. I have seen the term "NVH" used. NVH is a term in widespread use in the automotive industry used to describe the quality of noise and vibration inside a car.

"Noise" and "Vibration" are measurable values but "Harshness" is very subjective. The purpose of an engine mounting system is to reduce NVH to an acceptable level.

The ultimate goal is to make the running engine imperceptible to the driver and passengers. In reality this requires significant compromises in controlling engine movement and durability. Vibra-Technics engine mountings are designed to give excellent NVH performance without compromising engine control.

Depending on the engine configuration, vibration caused by engine out-of-balance can be in any 1, or a combination of 6 main axis. Linear; vertical, lateral and longitudinal.

Rotational; roll, pitch and yaw. Some engine configurations are inherently extremely well balanced such as 6 cylinder in-line engines, and some are very poor such as the in-line 4. Large displacement 4 cylinder engines (2.0L and above) suffer from a high level of vibration that occurs at twice engine speed, known as second-order out-of-balance. This often results in a booming noise in the car that can be heard at high engine speeds. In many cases engine designers have incorporated a balance (shaft spinning at twice engine speed) to cancel out these forces.

V8 engines with a multi-plane crankshaft and 90 degree V angle are effectively 4 V-twins connected end to end. These are well balanced and produce low levels of vibration. This is why it's the most popular configuration for a production car V8. A high performance racing V8 with a flat crankshaft has the same problem of second-order out-of-balance as a 4 cylinder in-line engine. The flat plane crank V8s are used by Ferrari, TVR AJP V8, Lotus Esprit V8 and the new McLaren MP4 12C.

Torsional vibration caused by cylinder firing usually generates a problem at very low engine speeds where the amplitude can be quite high and the frequency relatively low. This can give an unpleasant shake in the car at idle speed. Do you only make mounts in black rubber or can I have other colours? As Henry Ford said "you can have any colour you like so long as it's black". We use the same principal, for almost the same reason!

The black colour is carbon. As with other engineering and automotive applications of carbon it's used to control some of the most critical characteristics.

In the case of rubber it is strength, stiffness, abrasion resistance etc. In Henry Ford's day it was used as a pigment to make black enamel paint.

In the early part of the last Century, resin based paint containing carbon was a much more durable finish and dried quicker than other colours, so painting all the cars black was a faster process. The time taken to paint a car was a bottle-neck in Model T production so Henry standardised on black! We don't need to worry about speed but the increased durability and strength you get from carbon is important. Rubber can be moulded in other colours but at the sacrifice of some important characteristics. We don't compromise on performance, so we only ever use black rubber!

Why do you use rubber rather than urethane? We use the best materials and technology available to get the job done! Urethane is superior to rubber in its abrasion and chemical resistance which is why it's used in tyres for fork lift trucks, mud flaps etc. OEMs sometimes use it for suspension bump stops because of its abrasion resistance.

It is also much more economic to manufacture because it's also available as a pourable resin, so mould tooling is much cheaper. Rubber moulding requires specialist injection mould tools and high temperature high pressure moulding machines. For engine mounting applications natural rubber or natural/synthetic blended rubber is superior to urethane in every respect. # Creep and permanent set (permanent deformation). One of the many critical weaknesses of urethane as an engine mounting material is the change in characteristics across a temperature range, in particular its resilience. The engine bay is subject to extreme temperature ranges. Urethane is unstable under these conditions. This is why OEMS never use urethane for a primary engine mounting system. Our policy is a no compromise, ultimate engine mount solution. If urethane was the best stuff to use, we would use it!

My application is not listed, do you do one-off projects? Because of the way many vehicle manufacturers now use global platforms, we may already make a mount suitable for your application that is used on another vehicle. Please let us know what you drive and we will see if we have something that will fit. To develop a complex custom one-off system can be expensive. Before we have the first prototypes for vehicle trials, it will have taken up to 200 man hours in the R&D phase.

Future applications we will be looking at when we have cleared the current backlog are. If you have one of these, and would like to be part of the development program, let us know. Should you also require any other Suspension bush, please. Many thanks for your interest.

We pride ourselves on a quality service and we are happy to address any concerns. This item is in the category "Vehicle Parts & Accessories\Car Tuning & Styling\Engine, Tuning & Chips\Performance Engine Mounts". The seller is "mjd128" and is located in this country: GB. This item can be shipped worldwide.